On August 31st, Netflix shared a photo of the confirmed cast of “Role Model Family.” The drama will be led by Jung Woo, Park Hee Soon, Yoon Jin Seo, and Park Ji Yun. The Netflix original series will be helmed by “Love Alarm 2” and “Suits” director, Kim Jin Woo. The drama will be produced by Production H.

“Role Model Family” will depict the story of an ordinary father who is on the brink of bankruptcy and divorce. He accidentally discovers a car full of money that led him to be entangled with the second-in-command of a drug gang.

Jung Woo will bring life to the character of Choi Kang Jun. He will present an ordinary man who got involved in a drug gang. Park Hee Soon will play the role of Gwang Cheol, the second-in-command of a drug gang. Yoon Jin Seo on the other hand will portray Eun Joo, the wife of Choi Kang Jun. She hides a mysterious secret that will give color to the story. Lastly, Park Ji Yun will play as the drug investigation team leader named Joo Hyeon. She will be the one investigating Gwang Cheol and his gang.

The upcoming drama will exclusively be available on Netflix. The release date is yet to be announced. 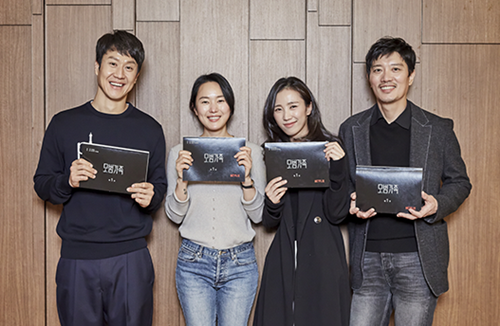 This drama will be Park Hee Soon’s comeback to the small screen. He last starred in the 2019 drama “Beautiful World.” The actor will also appear in the upcoming movie “The Policeman’s Lineage” with Jo Jin Woong, Choi Woo Shik, and more.

“Role Model Family” will also be Yoon Jin Seo’s comeback drama. She last appeared in the 2016 drama “The Royal Gambler.” She is also set to star in the movie “Iron Lady.”

Meanwhile, Park Ji Yun last appeared in the ongoing drama “Hospital Playlist 2.” She made a special appearance in the drama as Kim Dae Myung’s ex-wife. She last starred in the 2020 drama “Stranger 2” as a prosecutor.

What are your thoughts on the main cast of “Role Model Family”?