Sapai Jao Sua (2021) is a remake of the 2010 Thai romantic-comedy under the same name (yes, Thailand remakes their dramas every 10 years or so). First, let me tell you what the drama is about since the summary on MDL is long and spoilery.

Traiwit or Wit, a Chinese-Thai young man coming from a wealthy family, tried to get away from his controlling father Tien, a silk textile business tycoon. Wit opposed his father by choosing a career as a police officer. During a secret mission to North-Eastern Thailand, where the Isan people live, he met Fahsai, an Isan girl with an aspiration to develop her hometown. When he was transferred back to Bangkok, to avoid Tien’s plan to marry him off, Wit hired Fahsai as his fake wife to help him fight against his father.

Now that you have been warned, let’s read the more fun stuff: the characters. We will start with the main couple.

Wit comes from a rich Thai-Chinese family doing business in the silk textile industry. Instead of easily being handed a job at the family company, he opted to be a police officer. Wit is very dedicated to his job, which took him to the current position as a captain who handles illegal drug cases. While working undercover in the North-Eastern part of Thailand where the Isan people live, Wit meets and befriends Fahsai.

Although a country girl, Fah is smart and holds a bachelor degree in Agriculture. She also desires to develop her hometown’s economy, one of them being in silk production. After knowing her aspiration and that she has a backbone (= an unwillingness to be used or taken for granted), Wit struck a deal with Fah to help her with further education and internship at his family company in exchange for helping him fight his father’s control of his future marriage by becoming his fake wife. 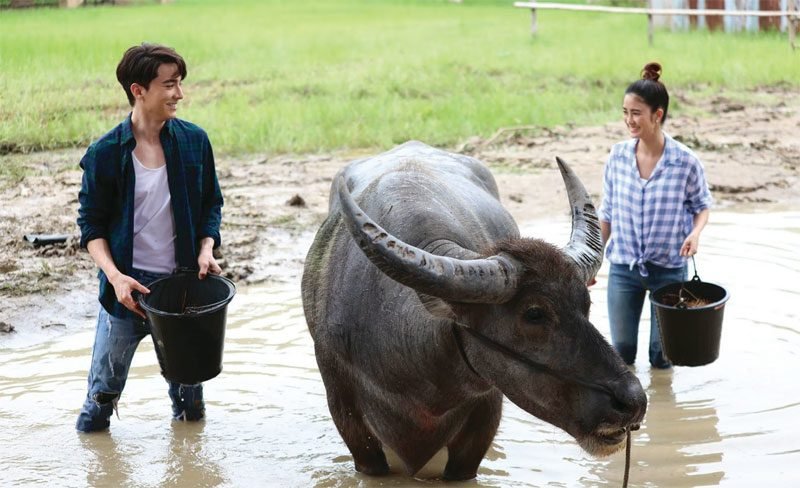 But becoming a fake couple is not easy, as the deal is only known by Wit and Fah. As shown in the GIF above, they always have to be alert and act as a lovey-dovey pair in every situation. Sparks fly between Wit and Fah as time goes by, but so is the heated war between them and the family. So, who are the ‘enemies’?

Traiwit’s parents, Tien (Jaturong Mokjok) and Lui  (Kaew Apiradee Pawaputanont), put major efforts into preserving the Chinese tradition in the family (Tien performs lion dance and Lui sings Chinese opera). They also raised their four sons with an old-fashioned child upbringing style in which they have a say in their children’s education and pick their wives. Although Lui is more gentle and accommodating, Tien is villainous and determined. He orchestrates various schemes to separate Wit and Fah.

Fun fact: The actor who played Tien is also a horror movie director. 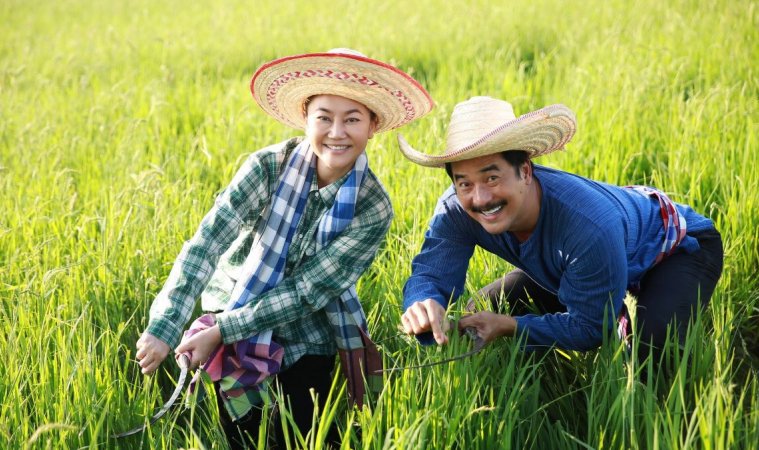 Fahsai’s parents, Ming (Wit Phutharit Prombandal) and Soy (Nong Pornsuda), got to know Wit while he was in their hometown when he stayed at their place. Although Soy is polite and more easy-going to Wit (especially knowing that he is a cop), Ming is very protective of his beloved daughter and harsh towards his ‘son-in-law’. Only when Fah showed him the (fake) marriage certificate did he let his daughter go. Beware of angry dad’s ‘super power’, though!

Fun fact: The actress who played Soy is actually the executive producer of this drama.

Besides the main couple, I also like the Poom-Wan couple. I want to see them playing as the main couple in another drama in the future. They just look so adorable together!

Another feature of this drama that I absolutely love is the variety of cultures as told in the story and depicted in their costumes, as shown below.

Acknowledgements: Thank you to the editors who edited this article, and also to fellow lakorn fan Pijush who gave me some info on this drama.

Credits: I do not own any of the images used. Credits go to the respective owners. Self-made GIFs and pictures are taken from official posters/stills and drama scenes.