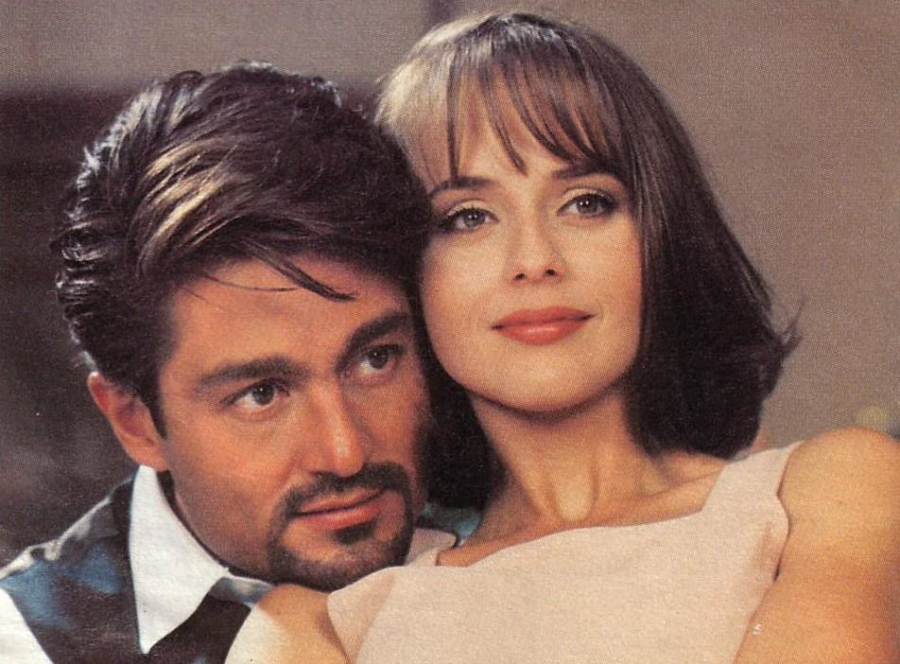 It is about two women who look identical, in fact they are twins who were separated at birth. The good twin is Paulina Martinez, who lives honestly despite living in poverty and has a fiancé, Osvaldo, but he is a cheater. The evil twin is Paola Bracho, who looks like Paulina but her opposite – rich, cunning, facetious and a cheater who is not contented with her husband Carlos Daniel Bracho. She has many lovers which include her brother in law Willy- the husband of Estefania. Tragedy strikes on Paulina, she witnesses the death of her mother due to an illness. She is also subjected to blackmail by Paola by putting her jewelry in her bag in order to make her disguise as Paola and take her place. Paulina is powerless so she has no choice but to submit to Paola. Paulina goes to the Bracho residence to pretend as Paola and Paola goes with Alessandro Farina to fled to Monaco. 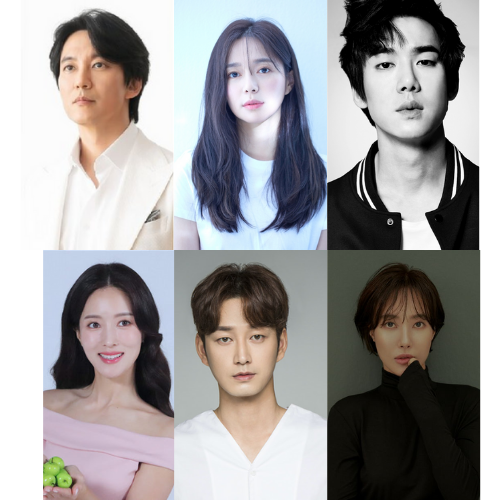 Cast Line Up For The Usurper

Also Known as: Henmyeongja, The Usurper, Day and Night

A story of two women with the same face and reversed lives:

Kang So Ra is a young woman unhappily married to the youngest son of Anjoo Group, Jang Jae Ha.  However, she has been involved with many men including Jang’s brother-in-law Seo Min Woo. She always finds excuses in order to escape from her husband.

Yoon An Na is a working student who does part-time in a local cafe of Ulsan as a chef. She has a financial crisis because of an unpaid student loan in her college.  Her mother confessed that she has a final stage of leukemia and eventually dies from it.

Yoon and Kang met each other in a local cafe. Their uncanny resemblance made Kang think she could let Yoon assume her identity and eventually escape with her lover. Kang tried to convince Yoon to assume her place but failed the first time. Kang didn’t give up to convince Yoon until she blackmailed Yoon saying that Yoon stole Kang’s valuables. Yoon is afraid to go to prison and decides to submit to the plan: pretend to be Kang So Ra and take her place as wife to Jang. How long would Yoon An Na pretend and hide her identity? Would she be able to fall in love with Jang Jae Ha? 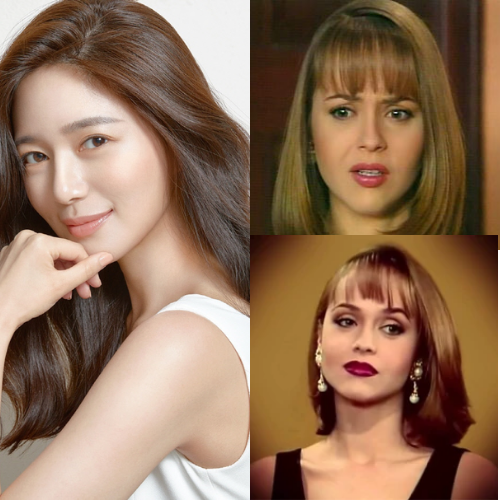 I can imagine that Lee Elijah could have her first time playing a dual role as identical twins. I have seen Lee Elijah playing the roles of a protagonist in Good Detective and an antagonistic role in Last Empress. She can pull off the roles of a good woman and an evil woman. She is not just a pretty face but she knows how to show emotions. Imagine Lee Elijah doing a dual role of a sweet, hardworking and kind dongsaeng yet she has temper and would also play a role of an evil eonnie who is cold and  takes pleasure in making other people miserable.  Lee Elijah would always cry in this drama since this drama is a tear-jerker and has sad romance. I think Lee Elijah and Kim Nam Gil would have their striking chemistry in this sad romance makjang drama. 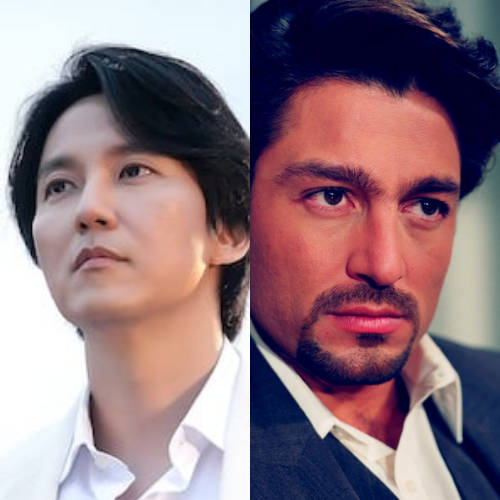 Kim Nam Gil is a stellar actor, I have witnessed his acting in dramas: Fiery Prest, Shark, and Bad Boy. I can imagine Kim Nam Gil playing the role of Carlos Daniel in a Korean version of La Usurpadora. It would be his first time to play the role of a father and a chaebol role that would suit him as well. Kim Nam Gil suits his role as a rich man and very handsome that gives an image of a chaebol.  l can imagine that he will always say “Yeobo” to Lee Elijah and his voice is a plus!! Kim Nam Gil possesses a handsome face and a handsome voice. He and Lee Elijah would have chemistry in this drama. 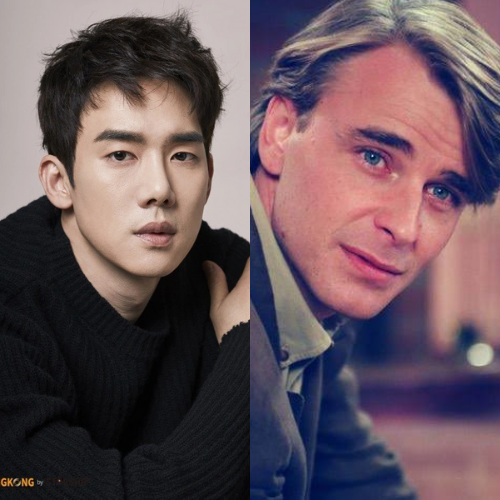 I can imagine Yoo Yeon Seok playing the role of Willy, the husband of Estefania Bracho and Paola’s lover in La Usurpadora. I have witnessed him in the drama “Mr Sunshine” where he played a role that gives off an image of a bad boy from a Korean yakuza, “Gu Dong Mae”. The reason why  I choose Yoo Yeon Seok  is because I am confident that he could pull off this role. In this version, his real aim is to become the chairman of the conglomerate and get rid of the original owners. 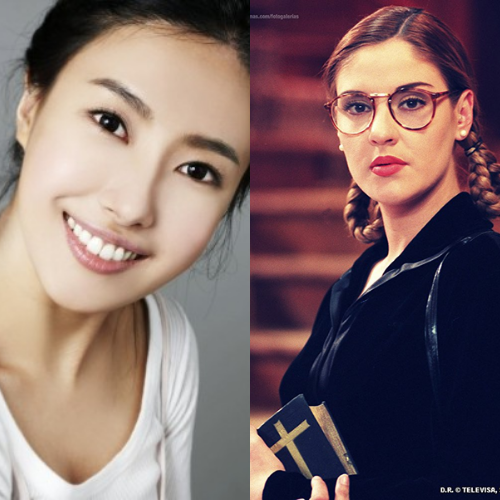 I would want to give a chance to this actress Kim Yoon Seo  to play the role of Estefania Bracho, the wife of Willy and the adopted sister of Carlos Daniel. Estefania is a religious woman, yet she’s toxic and a hypocrite who despises Paola for robbing her Willy.  I have seen Kim Yoon Seo in the drama Glass Mask where she played as an evil sister who is filled with hatred. Kim Yoon Seo is a versatile actress, although she always plays the role of a villain. I can imagine Kim Yoon Seo wearing glasses and holding a bible, with her eyes rolling and you would hear her say “Oppa” to Kim Nam Gil. Kim Yoon Seo and Yoo Yeon Seok would have chemistry in this drama also. 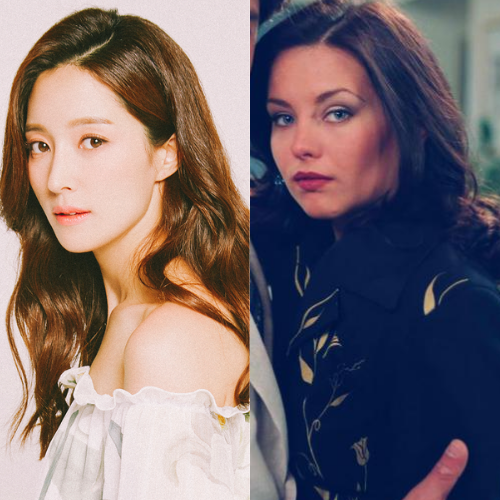 I would want Wang Bit Na to play the role of Gema the woman who is madly in love with Carlos Daniel. Wang Bit Na has played several roles of a seductive woman just like Gema. In my Korean Version Carlos Daniel is the seonbae of Gema instead of making them as cousins in this drama that would be weird wouldn’t it? I can imagine her saying to Carlos Daniel “Seonbae Bogoshipda” …I have seen Wang Bit Na act in the drama Love In Sadness wherein her role is as a woman who has been stuck in an unrequited love with a married  guy. Just like in “La Usurpadora” she would play  a character who has an undying love with her seonbae, although Carlos Daniel has married twice but she doesn’t give up on her love for him. Kim Nam Gil and Wang Bit Na would be cute together in this drama. 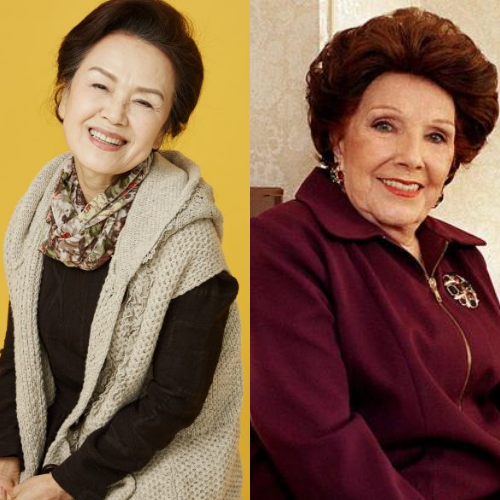 This veteran actress Jung Young Sook is who I can imagine playing the role of Abuela Piedad in La Usurpadora. I have seen Jung Young Sook in the drama Angel’s Revenge wherein she played the role of a strict chairman but a grandma who is sweet to her grandchildren. In this drama, she will also play a role of the grandmother of Carlos Daniel who became a drunkard after the death of her immediate family members and she regains her health when Paulina switched with Paola. 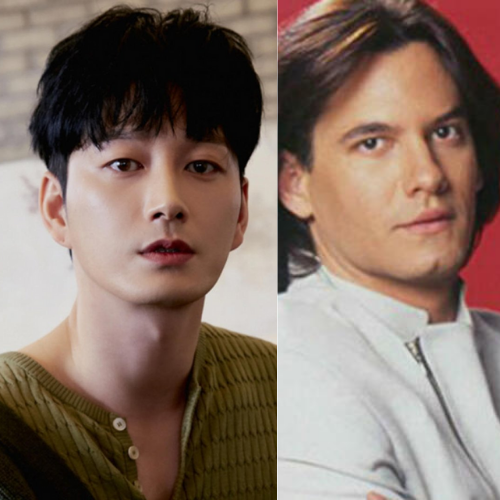 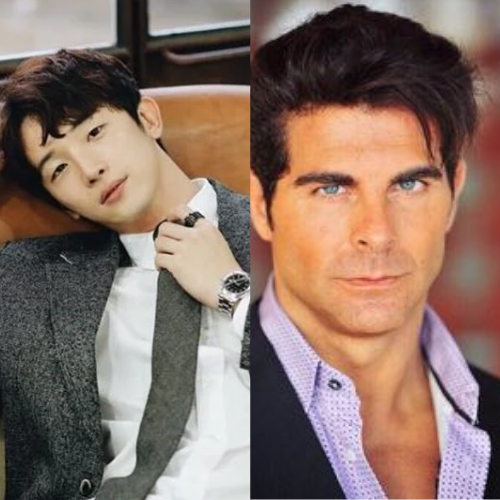 Lee Je Yeon would play the role of Donato D’ Angelli one of the lovers of Paola Bracho who does nude paintings of her. I have seen Lee Je Yeon act in Fiery Priest wherein he previously acedt with Kim Nam Gil. Lee Je Yeon acted as a supporting character, yet he also stole the show because he is cool! In “La Usurpadora” Donato D’Angeli’s image is of a guy with six pack abs. In the Korean version Lee Je Yeon would appear innocent yet alluring, who knows how to seduce a woman. I am curious how would Lee Je Yeon portray that role. 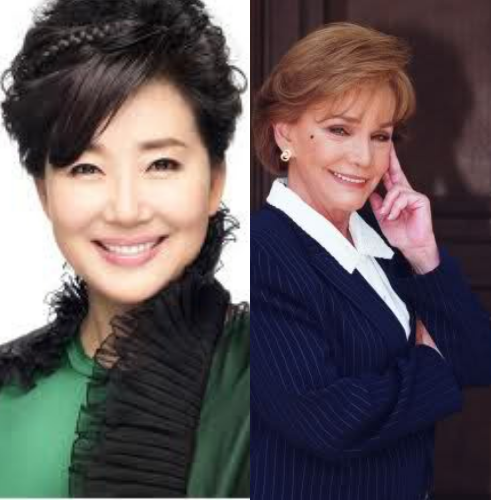 The veteran actress Oh Mi Hee would play the role of Fidelina the housekeeper of the Bracho residence and her secret child is Estefania. I have seen Oh Mi Hee in the drama Miss Monte Cristo where she is the chairman of a conglomerate who seeks revenge for the people who have done her wrong to her. I can imagine Oh Mi Hee would play a  character who hates Paola because of what she did to her daughter. She becomes doubtful of the sudden change of Paola – which is actually the switch of the identity of the twins. 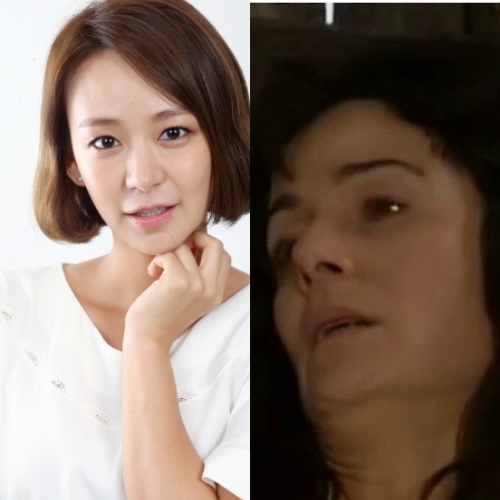 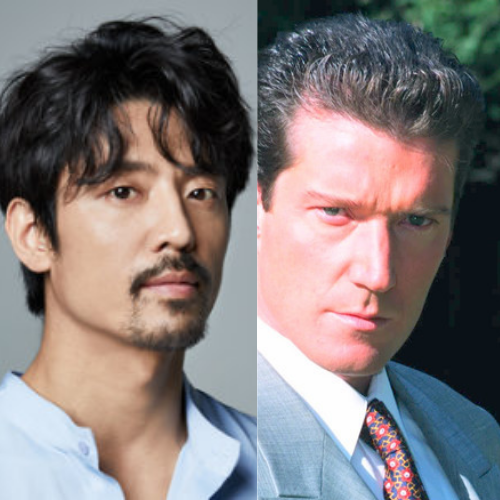 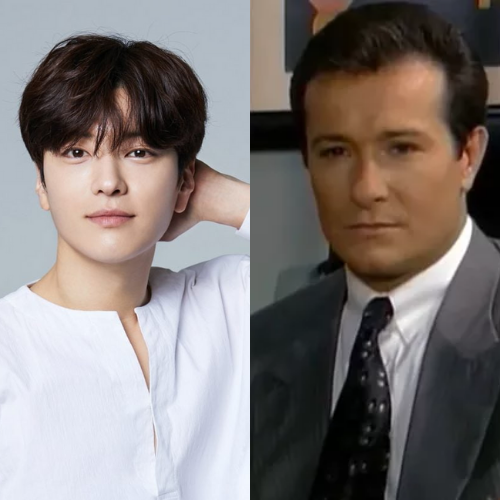 Jang Seung Jo would play the role of Attorney Edmundo Serrano who falls in love with his client Paulina. I have witnessed him play a role in the drama Familiar wife and have previously worked with Lee Elijah in the drama Good Detective where they have chemistry but it’s not a romance drama. So, Jang Seung Jo and Kim Nam Gil would have a rivalry in this drama. It would be boring if only the girls who are fighting for one man but also the guys who are fighting for one woman. Let’s see whom would Paulina end up in the end in Kdrama… 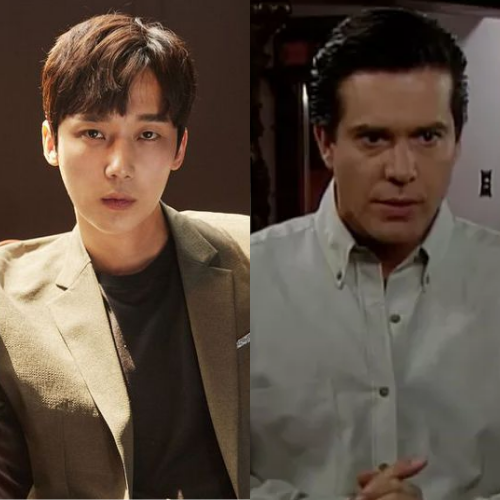 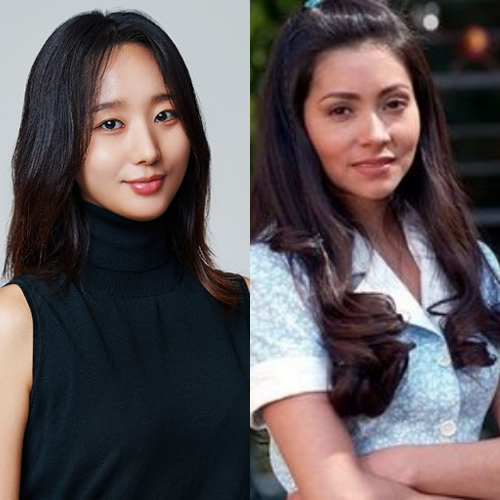 Shin Seo Hyung will play the role of Lalita the maid of the house who is very loyal to Paola Bracho. She has a quality of chatterbox and a gossip girl who knows everything what’s going on. I have witnessed Shin Seo Hyung act in Penthouse as the younger sister of Cheon Seo Jin. I can imagine her play the role of Lalita since I have watched her act in Penthouse and she has the potential to be a goofy and chatterbox character. 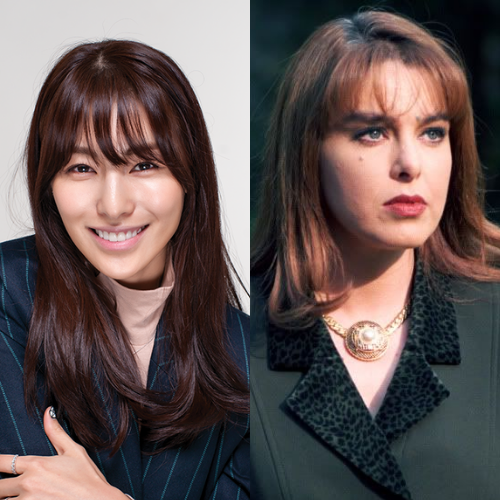 Kim Jung Hwa will play the role of Patricia as the kind wife of Rodrigo Bracho who never hates Paola and stays neutral when there is a conflict within the household. I have witnessed Kim Jung Hwa act in drama Mine as the ex girl friend of Seo Hyun and she is a good actress despite of being a guest role in the drama. I can imagine Kim Jung Hwa as Patricia because she has a very sophisticated look and elegant.

*- are not included in the original drama.

Related Articles by baby inzhagi: If Akatsuki no Yona was a Kdrama

Do you like my La Usurpadora Dream Cast and Story? Which is better “Original” or “Korean Fanmade”?