Caution: This article contains spoilers for the first half of Okaeri Mone.

The story of Okaeri Mone is divided into three parts: Mone’s life at Tome’s forestry department in the mountains, Mone’s ambitious zeal, which lands her a spot at a university and then at a TV Station, and finally her return to her hometown.

Nagaura Momone was born on 7 September 1995 on an auspicious day when dark rain clouds heralding bad omens loomed over the skyline. On that day, a huge tsunami came ashore and caused destruction. She lived with her parents, grandfather, and sister on an island off the coast of Kesennuma Bay in Miyagi Prefecture until 2014. 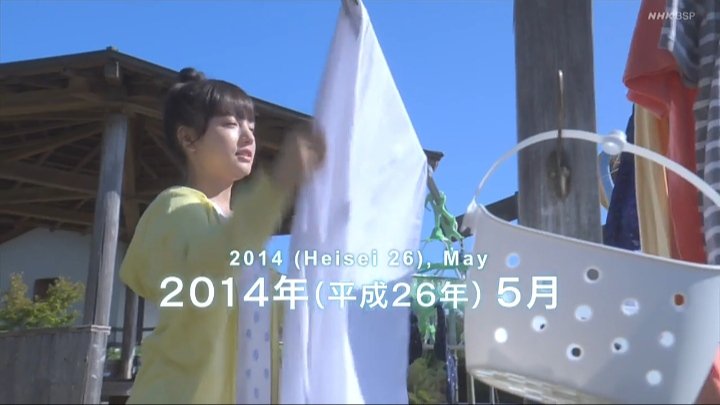 In the spring of 2014, after completing high school, Momone moves to Tome City to live with Nitta Sayaka, who is called the ‘Princess’ of Tome City and was once a friend of Mone’s late grandmother. She manages the selling and purchase of wood and other mountain products, runs the Forestry Department, and is a kind and strong character. She takes Momone under her wing, and during her stay at Tome, Mone becomes as vivacious as she had once been.

When popular weather forecaster Asaoka Satoru comes to visit Tome City, Momone is astounded by his powers to predict the weather, that everything, even mundane colds, can be connected to ‘meteoropathy’. It is a topic that studies nature, and Momone wishes that she could “predict the future”, too.

Mone is spellbound as iridescent clouds appear exactly at the moment Asaoka Satoru had predicted.

After getting caught in the woods during a storm, Mone again feels powerless in the face of nature and resolves to become a weather forecaster as she could have prevented this mishap if she had had better knowledge. She also feels that she would be useful to her town and its people if she could improve the fishing industry and predict the arrival of the natural disasters that often plagued her home.

“Once you know what you’re dealing with, it’s not scary.”

Even though Momone isn’t as proficient at her studies as her sister and the passing rate of the exam is a narrow 5 %, Momone puts her all into it, having finally found what she wants to do. Her endeavors are helped by the three kind ladies of the Forestry Department, the bickering Kenta and Denden, Nitta Sayaka, the locals of Tome City, and even the cold Suganami Koutaro.

After moving to Tokyo, ‘small-town girl’ Momone joins a weather forecasting company where she learns that weather forecasting has an influence in a number of spheres: Not only daily weather and disaster prevention but also fishing, agriculture, retail, infrastructure, sports, etc. She finally feels that she is helping others in her own way and feels content.

The final arc of her story is Momone’s return to her hometown. A few years later, in 2019, Momone is a well-experienced weather forecaster who has witnessed a large number of typhoons that plague Japan’s shoreline. She feels the strong desire to return to her home and help her family, friends, and people who have always awaited her return, hence giving the drama its title, which translates to “Welcome Back, Mone”.

The story is a perfect balance of heart-warming moments and gut-wrenching sadness, interspersed with the aura of suspense that surrounds the tragedy, which made Mone take the first chance she could to get off the island.

The story is paced out evenly over 120 episodes, with each episode contributing to the furthering of the plot and helping us understand Mone’s character more and also giving us a look into the people around her.

Like most asadoras, Okaeri Mone has a main protagonist and an armada of side characters. Each character is written carefully with a certain uniqueness to them, which makes them seem all the more real. Each character has a past, present, future, and a story to tell, and they all connect to Mone in some way or another.

Yes, Mone is the main focus of the story, but the other characters, instead of being ‘one-dimensional,’ feel as life-like as her. 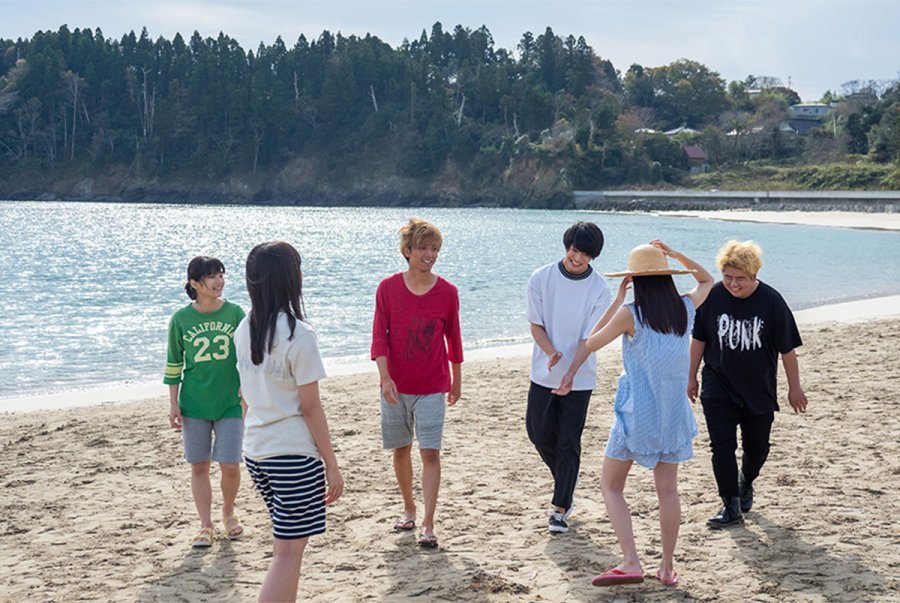 Nagaura Momone, also known as ‘Mone’, is the titular protagonist of Okaeri Mone. Instead of being a “Mary Sue,” Mone is a bright personality who has her own failures and problems to deal with, just like anybody else. She is also a firm character and is not easily swayed from her path by others.

Even though she was unable to pass the music exams, it is not for a lack of ambition. Once she put her mind to it, she passed the exam necessary to become a weather forecaster. At three significant moments in her life, Mone has had to face the harshness of nature. Her town has been destroyed by the cruelty of nature. Now she is dedicated to becoming a weather forecaster and eventually achieves her goal, after which she returns to her town to help her community using her knowledge.

She is a dedicated worker, and, as Nitta Sayaka says, even though she is a simple person who doesn’t draw attention to herself, people can’t help falling for her honesty and her amicable nature.

Okaeri Mone is first and foremost a story about life and love; love in all its forms, be it sisterly, familial, friendships, romance, or for our home, occupation, and music. It shows the types of relationships formed by Mone over the years, families, friendships, and maybe even sweethearts. 😉

Mone’s family members are close to one another. I love how the show shows that even after you have love and support, even after everything seems ‘okay,’ it is hard to deal with our problems sometimes. That sometimes, we just need to get away. The 3000 or so people in Kesennuma Bay are a closely-knit community who have together weathered tsunamis and a fire that scoured them three years ago. They celebrate together and help each other.

Romance isn’t the central message of the story, but it develops in the background, something to look forward to in the latter part of the story. If two people out of the 13,960,236 people inhabiting Tokyo meet at a laundromat, you know it’s true love. 😉 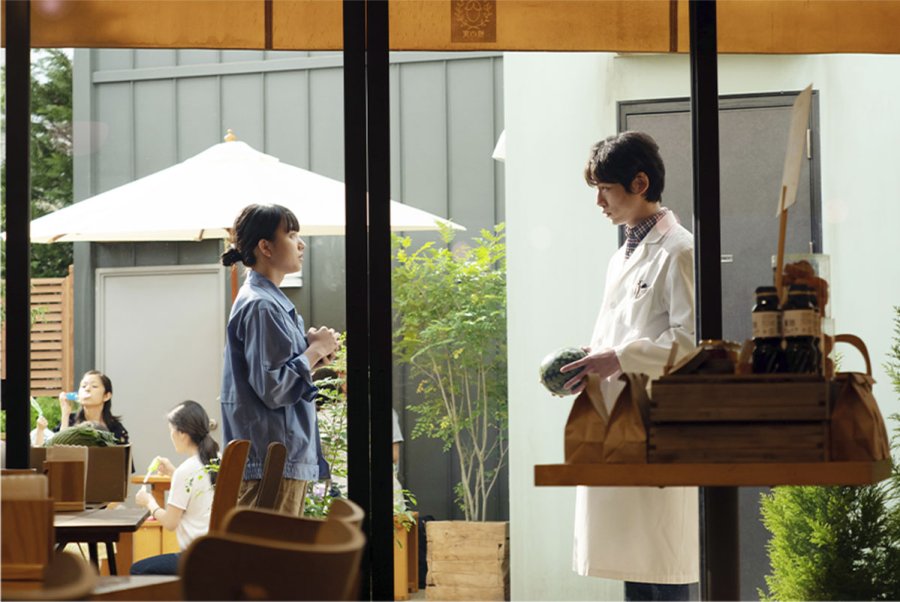 Mone and Suganami Koutaru at the Forestry cooperative in Tome City 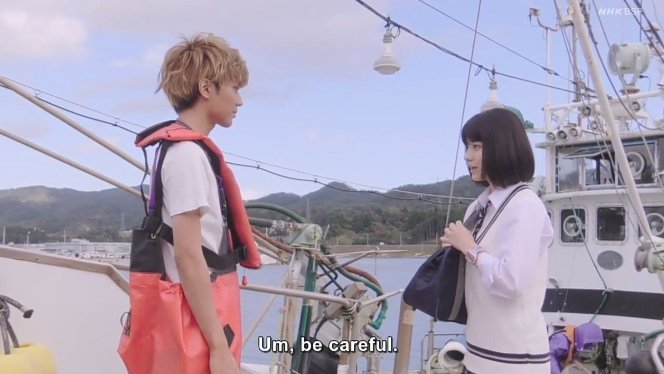 Nagaura Michi and Oikawa Ren meet after a long time at the fishing port of Kesennuma Bay.

Okaeri Mone has some splendid camerawork. The team brought lots of beautiful shots of the various locations in the drama, Kesennuma Bay, Tome City, Tokyo, etc. and let the audience experience the beauty of Japan’s rivers and shoreline, mountains and forests, and the sharp skyline of its city.

It also gives us a look into the rural lifestyle of the people who live by the sea and those in the mountains through the eyes of Mone, who is connected to both.

How can a 120-episode drama be easy to watch? Okaeri Mone is an asadora, and, like all asadoras, it has a format of more than 100 episodes of 15 minutes each. For Okaeri Mone, the total run time of all episodes is 30 hours.

The best part about Okaeri Mone is that it is  “binge-worthy” but also a nice, wholesome watch if you prefer to pace it out. Even though it is only one episode a day of 15 minutes each, each episode adds to Mone’s story and does not feel lacking. On the other hand, if one is in the mood to binge, the short format is simply perfect.

Apart from the format, the show itself is easy to watch. It isn’t a dull show, although it lacks the fast-paced storyline of most dramas. There are many emotions at work here as Mone’s character develops and the scenarios change. It’s something I could watch even after fourteen tiring hours at university.

For asadoras, it is important to have actors who can communicate the protagonist’s feelings and thoughts since most of the show is focused on them. Kiyohara Kaya was perfect as Mone. She is an experienced actress with several awards to her name. She debuted as an actress in 2015 in the NHK asadora Asa ka Gita and also received appreciation for her role in Toumei na Yurikago. The drama won the Grand Prize in the TV drama category at the 73rd Japan Arts Festival Awards in 2018. She has won three awards; the new face award through Confidence Drama Annual Awards, and the annual grand prize newcomer award in 2018 and the best actress award at the Tokyo Drama Awards in 2019.

Kiyohara Kara has developed a huge fan base for herself over the years, and she perfectly brings Mone’s character to life.

Asadoras also give a lot of importance to the development of side characters, and it is important to have characters who communicate their thoughts well. Overall, I would personally rate this show 10/10 for acting.

Why should we watch a drama for the OST?

You shouldn’t, except Okaeri Mone has one of the most beautiful OSTs ever and an amazing sound team who know exactly how to add sound effects to contribute the crescendo of emotions the show evokes in its viewers.

それでもいい これは僕の旅
Still, that is alright. Because this is my journey.

— Nanairo by BUMP OF CHICKEN —

Now for a few personal comments. Okaeri Mone was my first asadora, and I went into this drama because I love female-centered, character-driven stories (Anne with an E adapted from Anne of Green Gables is a personal favorite), but I was skeptical about the format.

But the simplicity of the story, the lucid portrayal, and the characters won my heart. I have no background to compare Okaeri Mone to other asadoras, and I’m sure there are many better asadoras; but for me, Okaeri Mone and Mone herself will always be special. As of now, I would rate it 9/10. Also, I don’t want to spoil exactly why Mone wants to leave her island because that incident hits hard while you’re watching it.

I hope I can convince more people to give this asadora a chance and a recap for those who already are watching it. If you dropped it or forgot about it somewhere along the way, then I hope you pick it up again because there is so much happening.

Until next time, everybody! 😀

Credits: Self-made gifs and screenshots. Banners are self-created. Posters have been taken from MDL. The story synopsis has been adapted from the NHK website for Okaeri Mone, but additions have been made to it. Lyrics and translations of Nanairo are from here.